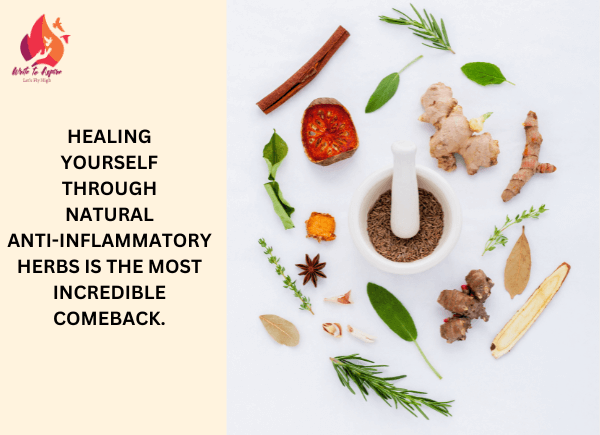 The word inflammation is becoming more prevalent in the health community as people become more aware of how inflammation causes illness and disease.

Every day, our immune systems fight with a million infection-causing pathogens. Sometimes the immune system fights them valiantly, and other times it falters due to poor dietary choices and decreased immunity.

This may be addressed of with the help of natural anti-inflammatory herbs that stop inflammation.

When our immune system is ready to fight, it tends to fight infections with a lot of force. This can sometimes cause inflammation to start up. When bacterial infections are particularly stubborn, inflammation and pain don’t always go away on their own. This is when natural anti-inflammatory herbs come into play.

We’ve collected a list of the natural anti-inflammatory herbs and spices that will not only enhance the flavor of your meals but will also boost your immunity. What a win-win situation. Ginger’s active constituents, gingerol, shogaol, and paradol, are what make this spicy root so anti-inflammatory.

According to scientific studies, ginger inhibits the production of the pro-inflammatory cytokines that cause inflammation to occur more frequently in the body.

Inflammation is unavoidable because it is required to defend the body, but it is chronic inflammation that you want to prevent. If you have an inflammatory problem, ginger is a natural and effective anti-inflammatory therapy to try. Fenugreek is one of the best natural anti-inflammatory herbs that you should be aware of. It is a long-used herb in alternative medicine, and its peppery flavor makes it a must-have in the cooking.

The benefits of fenugreek seeds as the greatest natural anti-inflammatory herb are hard to beat, whether you’re looking to alleviate the severe period cramps or give your immune system a much-needed antioxidant boost. You probably immediately think of cayenne peppers when you hear the word cayenne. Also, we do! Cayenne is great for adding flavor, but it’s also effective in reducing inflammation.

Cayenne peppers contain capsaicinoids, which have become popular as a natural pain reliever. You can find capsaicin in ointments and lotions that soothe sore muscles and joints. In a study published in Osteoarthritis Cartilage, researchers found that capsaicin cream might relieve pain as effectively as non-steroidal anti-inflammatory drugs (NSAIDs). Curcumin, which is turmeric’s main active ingredient has anti-inflammatory properties that could make it a treatment for a number of health problems, such as helping people with osteoarthritis feel less pain and move more easily.

It works by stopping the body from making cytokines, which are molecules that cause inflammation.

Other research shows that curcumin may lower the levels of cholesterol and triglycerides. Also, it may help ease some of the signs of rheumatoid arthritis, like swollen joints and stiffness in the morningCurcumin’s impact on Crohn’s disease, some malignancies, depression, diabetes, joint discomfort, and IBS are also being studied. Cilantro (otherwise known as cilantro) is one of the most effective natural anti-inflammatory herbs.

It aids in the fight against metal toxicity, which can affect the body’s functions. Cilantro contains the chemical quercetin. Quercetin is an anti-inflammatory substance that aids in the resolution of digestive issues and so aids the body’s immune system in combating all forms of oxidative stress.

Additionally, coriander is great for getting rid of skin problems like eczema, dryness, fungal infections, and mouth ulcers because it is a disinfectant, cleanser, antiseptic, antifungal, and antioxidant.

Because of the positive effects that cilantro and coriander have on one’s health, you can try these herbs to season your steaks and salads. It is one the most effective natural anti-inflammatory herbs.

Black pepper, often known as the “King of Spices,” has long been valued for its flavor as well as its antibacterial, antioxidant, and anti-inflammatory properties.

According to studies, piperine, one of black pepper’s chemical constituents, may be particularly useful in the early stages of acute inflammation.

The piperine aids in the treatment of bronchial inflammation brought on by asthma or seasonal allergies.

Also, it is one of the easiest spices to use in your kitchen. You can sprinkle black pepper on your sunny-side-up egg, as well as on stews, steaks, and salads. Cloves contain a number of compounds, many of which have been associated to qualities that reduce inflammation. Among these compounds, eugenol is by far the most significant. It has been demonstrated that eugenol can lessen the inflammatory response in the body, which can both assist manage symptoms of inflammatory diseases like arthritis and reduce the risk of developing such diseases. Ashwagandha is a well-known anti-inflammatory herb that can assist in the reduction of cortisol inside the body and the combating of the adverse effects that are caused by stress. As a result of its anti-inflammatory properties, ashwagandha can help maintain a healthy blood sugar level, reduce stress and adrenal exhaustion, and improve immune function.

The herb may also help protect against skin inflammation, according to research.

Furthermore, it’s getting a lot of attention for its ability to relieve stress and anxiety, and it’s also used in formulas to help people sleep well. Cat’s claw was traditionally drunk in the form of tea, but it is now also available in liquid extract and capsules. It’s also available in topicals, which are used to treat things like muscle and joint discomfort. The tranquil and relaxing properties of the kava kava plant have made it a popular herbal remedy. It has been found that kava root extracts contain anti-inflammatory effects and support immune system health.

According to research, because of the remarkable components it contains, kava kava may be able to alleviate the symptoms of inflammatory illnesses such as rheumatoid arthritis.

When you try new anti-inflammatory teas, natural anti-inflammatory herbs, or drinks, it’s important to make sure that none of the herbs interact with any medicines you may be taking. You can find out which herbs or supplements to stay away from if you’re on a particular medication by asking your doctor.

You can ask your doctor or nurse what herbs or supplements you shouldn’t take with certain drugs.

If any of these healing herbs make your stomach upset, give you a rash or skin irritations, or make you feel bad in any other way, stop using them right away.

Which are inflammatory foods and how they stimulate inflammation in your body?