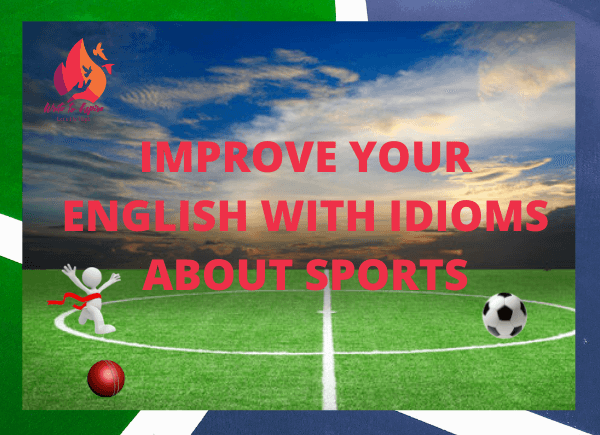 Learn Idioms about Sports to Improve your English

Geez, I couldn’t continue working out enthusiastically in the gym yesterday as the household chores made me very tired. I “threw in the towel” and didn’t “meet my match.” Hold on! Not have a clue what I’m talking about? All right! Just keep reading this article to come across idioms about sports in English. Now you may be wondering why we need to learn it? Of course, native English speakers use idioms about sports and many other types of idioms around the clock. For this reason, it’s imperative for you to learn sports idioms, family idioms, color idioms, weather idioms, American idiomatic expressions, idioms about happiness and many more to use them in everyday conversation.

Remember not everything people talk about should be taken word for word. Likewise, when you use idioms, you come to know that they have a certain group of words giving entirely a different meaning from the actual elucidation of individual words.

Have you ever asked yourself how to criticize or praise someone’s activities? Here is a collection of thrilling idioms about sports to help you being active in general.

The List of Idioms about Sports with Meanings and Examples

Meaning: to bring about extremely well

Example: She is absolutely sure that she hit that test out of the park.

Example: I’m fine with either Sarah or Emma as the head girl in the school. I don’t have a horse in this race.

3. Keep your eye on the ball

Meaning: an informal way of telling someone to pay attention to the situation

Example: Our competitor made a very major improvement to their product as we didn’t keep our eye on the ball.

Meaning: used to refer to a situation in which someone either succeeds or fails completely.

Example: When I started my new job, I was given no help. I was left to sink or swim.

Meaning: a tricky or difficult situation

Example: New Zealand won the toss and decided to bat first on a sticky wicket.

6. Get the ball rolling

Meaning: to do something to start an activity

Example: William got the ball rolling by presenting his idea first.

Meaning: to act harshly in order to get what you want

Example: He didn’t want to give my money back. So, I decided to play hardball.

Meaning: to be very zestful and strong

Example: Tom walks softly but he packs a punch.

Meaning: an awkward situation that is difficult to deal with

Example: Mother nature threw us a curve ball last summer with the record-breaking rise of temperature.

Example: The support of a heavy hitter soon made him successful in the music industry.

Meaning: to do a very difficult task so that to achieve something

Example: I had to jump through hoops to get to my bus.

Example: She hit the target with extreme accuracy.

Meaning: to begin the fight or competing fiercely to achieve something

Example: Liam and James took their gloves off and started arguing.

Meaning: to quit or abandon

Example: I’m going to throw in the towel since I lost two games.

Meaning: It’s someone else’s turn to make a move

Example: Emma has done more than enough to save her marriage. The ball is in his husband’s court now.

Meaning: to be mean or unfair; hurting someone in an inappropriate way

Example: Recently, I had an argument with a colleague and he insulted me. That was certainly a hit below the belt.

Meaning: a consecutive series of victories

Example: He hasn’t forgiven me for my winning streak back in January.

Meaning: a risky bet that has a low probability of success

Example: I always bet on long shots at the racetrack.

2 thoughts on “Idioms About Sports With Meanings and Examples”